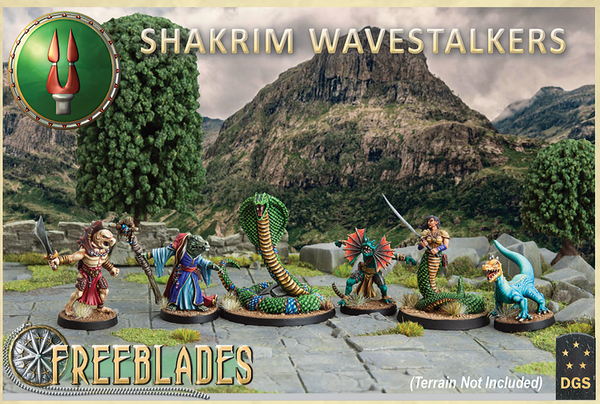 The Shakrim originated as outcasts of the Empire who were exiled or fled to the archipelago. There they fell under the sway of the Great Shakkamal, a manifestation of the god-aspect of deception and subterfuge. Shakkamal blesses his followers with reptilian characteristics in kind with their level of devotion and inner desires. The first generation took on aspects of snakes and are known as the Blessed, those closest to Shakkamal. Later generations have aspects of other reptiles and are known as the After. Over two thousand years the Shakrim have grown to a powerful realm that controls the eastern seaways between the continents. This set contains six 32mm models in white metal with round plastic bases. Some cleaning and assembly is required. Models supplied unpainted. Terrain Not Included. The Shakrim Wavestalkers Starter Set contains a 150 gold freeband, including the following models 1 Steel Fang (Leader) 1 Nerodix (Caster) 1 Shellback 1 Viperon 1 Spitter 1 Tilik