BrightSword is a Fantasy Role-playing Game. A role-playing game consists of a group of players each acting out the role of an alternate persona. They do so within an imaginary world created by another participant known as the Gamemaster (GM). Role-playing games come in many forms, usually defined by the type or genre of environment in which the action takes place. In BrightSword, the action takes place in a fantasy setting where the players act out the roles of heroic adventurers. 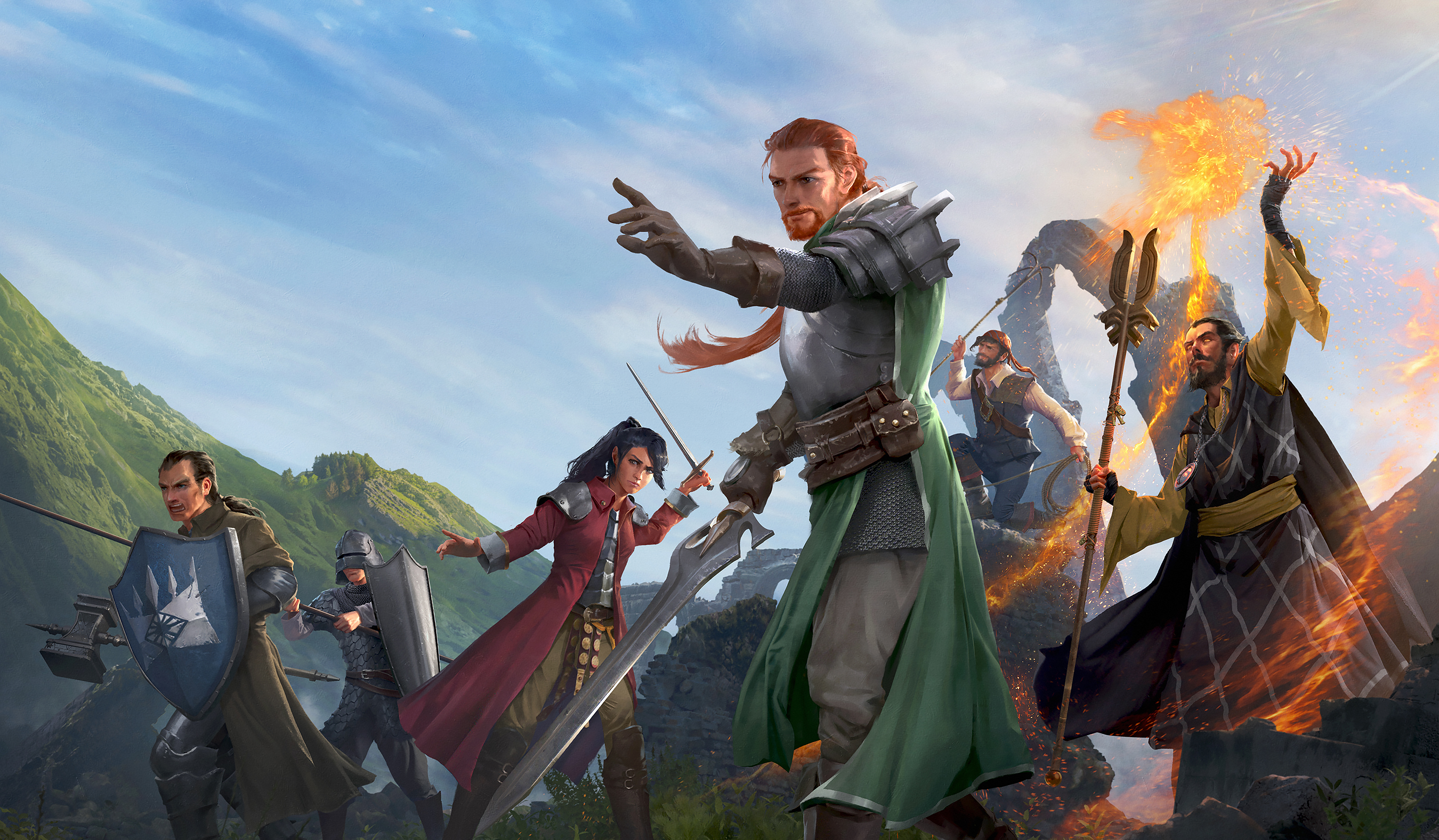 BrightSword is set in the World of Faelon—a world of great beauty and great danger, politics and religion, intrigue and honor, people and power, magic and mystery. More than a dozen factions strive for domination and survival across Faelon’s two known continents. Strange creatures move along the fault lines of civilization, some from a past that never passed out of reckoning, some from portals between Faelon and Mervael, the Spirit World, and some from Faelon’s heavens and hells.

The gods have sundered Faelon’s magic in twain. Casters are divided between spells that influence the inorganic and inanimate and those that influence creatures both living and recently alive. Only an immortal may learn the secrets of both, leading some to seek immortality through pacts with abominations.

Above all, Faelon is the story of its people, resonant characters who seek power and peril each in their own way against a backdrop that is as full of life as it as it is fraught with menace.

See https://dgsgames.com/world-of-faelon/ for information on how to access the World of Faelon. 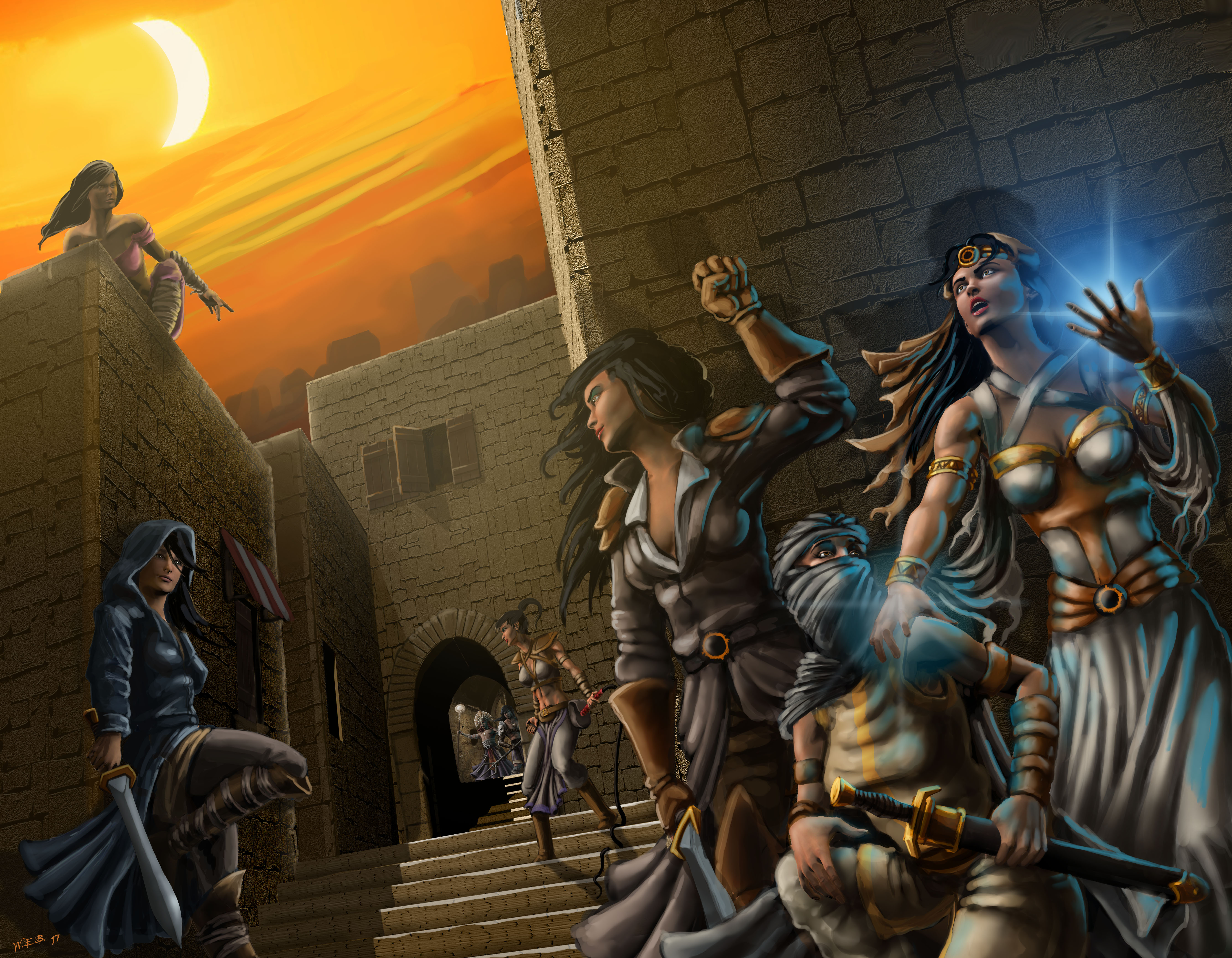 The structure of the game assumes a basic pace of narrative followed by encounter. In the narrative portion of the game, players are describing their actions and the GM is describing the scene, changes to the scene as they occur and the actions of the non-player characters and creatures with whom the players interact.

It is the central nature of the narrative part of play that conflict is not ongoing or imminent. The adventurers are attending the King of Haradel in his court, negotiating passage across the Inner Sea or gathering information in the common room of a local inn. Now, if a fight breaks out in the inn, that’s an example of an encounter. Play transitions to a different mode where adventurers take actions in order and combat and spell casting and bardic performances take the stage. Then, when the action of the encounter is resolved, play returns to the narrative with the aftermath and the scenes that follow.

There are nearly as many views on how a role-playing game should flow as there are people playing in them. Here’s our take on all those various viewpoints: we don’t take sides. This game is a toolkit. Tinkering forged it and you should go right on tinkering with it to suit your needs. Use as much or as little as you like. Only you know your style, your preferences, and your group. We are not here to involve ourselves in discussions of tabletop vs mechanics vs narrative vs old school revival vs systems vs no GM vs whatever.

• Players should play what and how they want to play.

• If you don’t want to use mechanics, having mechanics doesn’t hurt you.

• If you want to use mechanics, they must be there.

We want players to be able to move between as many types of games about Faelon as possible as seamlessly as possible. If you only want to use BrightSword to role-play, you don’t need everything in here. If you want to move your persona back and forth between role-playing, skirmish, battle and other games, they all must have core mechanics in common. A lot of what you find in BrightSword references the position of adventurers and models representing them. Again, that is because BrightSword’s main role is to be the role-playing component of a suite of games that allow players to experience Faelon in any way they prefer and to be able to move the same adventurers back and forth between those types of experience with ease.

So, BrightSword having mechanics is not a statement that we believe RPGs with mechanics are better than others. They are here because there are certain ways to play that require them. Other ways can ignore as much or as little as they wish, and we are cool with that.

In 1008, the Khanate of Grular, supported by an unprecedented number of demon allies, launches an all-out invasion of the west. Their objective is to sweep through Trilias and Haradel and conquer Falkaar in a lightning campaign. Even with their tremendous weight of numbers and a nomadic culture divorced of conventional supply concerns, this undertaking would be sheer folly. Among those demon allies, however, they count many of the Dragons, archdemons of Karelon and each the equivalent of an army in sheer destructive power. The three kingdoms will hatch a desperate plan to resist the onslaught, a plan ultimately dependent on the creation and employment of what will become the greatest artifact of the age, Jasetar, the BrightSword.

The BrightSword War, and the opportunistic campaign launched by the Traazorite Empire that will become known as the Jaguar Crusade, serve as the main story arcs that tie BrightSword’s initial campaigns, modules and supplements together.

The Tiered Dice System provides you a unique way to play your fantasy games. No, it’s not the first game system to explode a die or use more than one die type. What is special about Tiered Dice is how it helps you tell the story of what happens in your games. The combination of spikes – exploding dice – increasing die sizes due to talents and game effects, exciting new die types (d14, d16, d18, d24, etc.) and the rules for talents, skills and attributes combine to give you the feel something special is happening and plenty of epic results to fill your tales of accomplishment and woe during and after the game.

It is our job to get these rules right for you and not make it your problem when we get them wrong. We at DGS recognize that there are no perfect rulebooks and even fewer perfect game designers. Although we will endeavor mightily to get everything right the first time, we will make mistakes. But when we do, we will fix them and provide you those fixes quickly, and for free.

But our Living Rulebooks (LRBs) are not just designed to get you errata.  Each time we introduce major elements into the game system, we publish a new LRB and make it available to you free of charge.  No need to collect and sift through multiple products.

The World of Faelon is a deep and broad background providing endless gaming and storytelling possibilities. It is deep, with histories and relationships, cultures and languages, flora and fauna all describing a place you want to explore, live and die in and battle over. It is broad, with dozens of factions and nearly limitless locales and personalities. There’s room for everyone in Faelon. There’s a faction here for you. Quite possibly more than one!  See https://dgsgames.com/world-of-faelon/ for information on how to access the World of Faelon.

Game companies are a hard business. To be truly successful, you need people who know how to run a business and keep it in the black and growing. But that is not enough. We don’t want to be a company where profit is the only bottom line. We are gamers and we are very familiar with what makes a gamer happy. And we intend to give it to you.

We’re going to give you great customer service. If you find there’s a problem with one of our products, we will do our best to fix it. If there’s something you don’t like, we’re going to listen. We might not choose to act on every suggestion, especially in those tough situations where some customers want things one way and some want it the opposite way. We’ll make the hard call. What we won’t do is ignore you. We’re going to answer your questions. Every game leaves some gamer somewhere with a question. Our social media platforms are the places to ask it. We will answer, and we will answer in a timely manner.

You get to be involved. We want you to be part of the making of our games and the growth of our background.

You can be a DGS playtester, getting an early look at what is next and helping us find problems and suggesting fixes so that our games become the ones you want to play.

Speaking of the story of the World of Faelon, we at DGS have a vision for how that story will play out. But we have not filled in every blank or chosen every path. Some of our fans will be chosen to help set that direction. The more involved in our games you are, the more likely you’ll get a chance to put yourself right into the story and help chart its course!