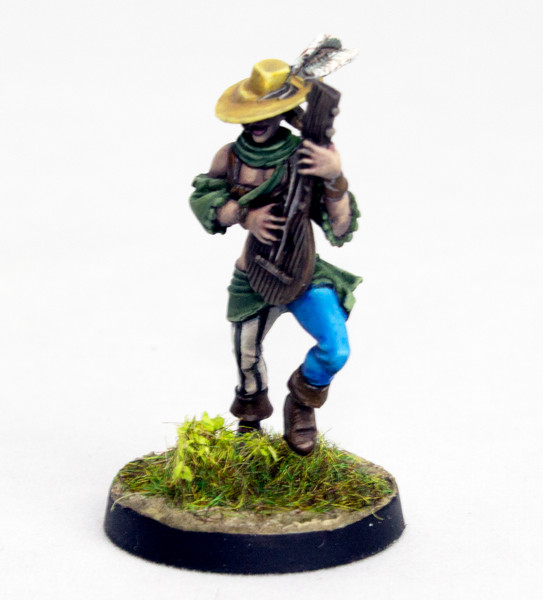 The Bard is a hero who brings an entirely new talent set into the game: Perform. The Bard’s performances augment her fellow freeblades and she has a number of options from which to choose. The model comes with two heads and two instruments and can be built in four different ways. She represents two different models in the game. First, she can serve as Glenaris Goldrhyme, the Bard of the Arlian. This version is the more powerful of the two and is a unique named character who can serve in either of the bandit freebands, Black Rose or Black Thorn. The other version is the Wandering Bard, representing the many bards, minstrels and troubadours who wander Faelon looking for adventure and audiences. The Wandering Bard can serve as an ally in any Freeband except the Traazorites. Ostensibly, the Bard of the Arlian carries a lute and wears her distinctive hat and the Wandering Bard plays a lyre. But the model is there for you to build any way you choose. This is a single model that contains the parts to be built more than one way. This is a 32mm white metal model in 5 pieces: body, 2 head options (hatted or bare), 2 instrument options (lyre or lute) with a 25mm round plastic base. Supplied unpainted, assembly required. Sculpted by Sergio Alonso Leon.